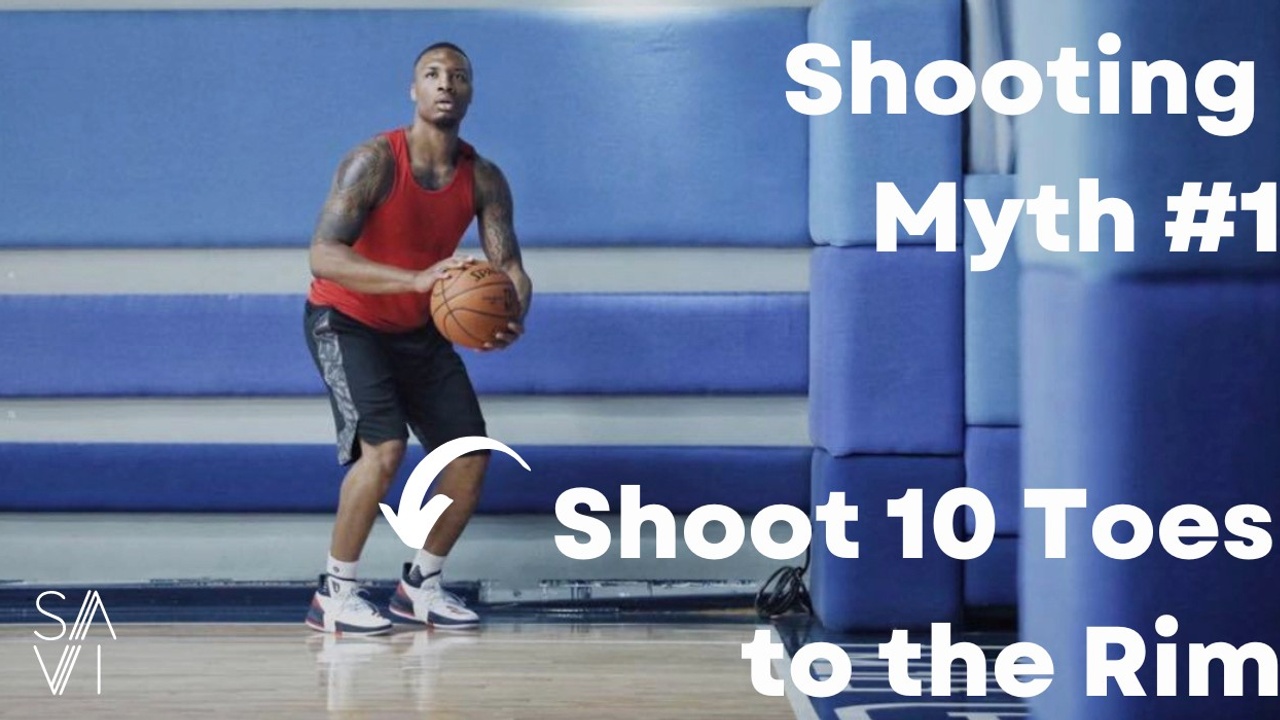 Too often coaches overvalue form at the expense of function and relevant experience.

Don’t do this. It murders too many shots.

Today you'll destroy the first myth. You'll say goodbye to the limiting beliefs that don’t let you perform at your best.

You’ve heard it, you’ve said it, and you might even still try and do it, “Shoot with ten toes to the rim.”

Chances are, you have taught shooters to “Shoot with ten toes to the rim”… But, I have too. When we’re taught a certain way, we tend to teach that way without giving it too much thought. But…

SAVI is wisdom applied. So, we don’t do things because, “That’s how it’s always been done.” We question everything in hopes of finding a better way. When we do find a better way, we share it with you.

In the 17 years I’ve taught basketball, the best way for players to shoot authentically, more powerfully, and with better aim is – to shoot with a tilted footprint. (It gets their shooting shoulder closer to the shot line)

Shooting with ten toes to the rim is the traditional shooting approach. The “appeal to tradition fallacy” occurs when someone claims something must be good or true because it has always been done that way. (But as you know, that isn’t always the case).

Here’s (one reason for each toe) why you shouldn’t shoot 10 toes to the rim.

Your shot should be: Simple, repeatable, and effective.

Allow the freedom to find an authentic footprint. It simplifies the shooting motion. Less starts, stops, and pauses allow for continuous power. Stacking hips over feet and shoulder over hips to align the release shoulder with the target smooths out the transition from lift to release.

Try it, the ball will release off the shoulder faster than the chest or face. Most shooters will develop a lower and stronger platter point which allows them to shoot from further out.

At least it has for Curry, Nash, and Young.

Too many players are told to focus on having an elbow in, that’s a focus on form.

But, that isn’t the goal! The goal is to shoot the ball on line and into a cylinder.

When allowed freedom to tilt their footprint most shooters EASILY align the arm, hand, and ball. It’s much harder to wrench one's elbow under the ball early in the shot while restricting the lower body in an opposing position.

Stand ten toes straight ahead. Then, lift your shooting arm across your body and hold it up over your nose above eye level. Relax, really relax, and let it drop and swing. Chances are, your arm will swing across your shot line and out past your hips.

Do the same with your feet 90 degrees to your shot line. Yeah, this is just an exaggerated test, not a suggested footprint ;)

Watch and feel the line that the shooting arm falls down on when you let gravity do its thing. Chances are your arm swings down your shot line and hits your side.

Which line do you like better? Which is simpler? Which will allow gravity to apply force down your line more efficiently?

4. The Best Shooters Have Turned Feet!

There was a recent study that evaluated the footprint of the 36 best shooters in the world.

Zero had ten toes to the rim when shooting from distance.

Not all footprints are the same - some are more square to the shot line, but many more are tilted to varying degrees.. Watch the trend of the best. Success leaves clues.

Let’s DETECT them and DISCOVER what is authentic to each shooter.

We don’t (usually) chest pass our shot to the hoop. Many players are told and believe they need to get their “guide” hand out of their shot.

Well, THEY DON’T, but that’s a myth for later.

Providing freedom to tilt a shooter's feet removes much of the interference the “guide” hand can create on the release of the ball. More tilt to the feet is a tool to develop a one handed shot more naturally.

The goal is building a shot with range. Because, the shots from distance are the most valuable shots in basketball.

We know this as it applies to other sports, too. (Golf, baseball, tennis, etc.)

We must load on the catch to shoot effectively. But, I won’t call this triple threat. Triple threat as a position is limiting. The concept is good, you should be able to do all three, pass, shoot, and dribble.

The position of exposing the ball away from the body is questionable and doing it with ten toes to the rim is not functional in an invasion game like basketball.

Don’t expose the ball in front of your body and keep the ball shielded over your pivot, close to your body, in your power box.

Watch the best 1 on 1 players - the ball is protected on their non-shooting side, over the pivot foot, while their body and shoulder turns towards the defender to jab and pivot, to create space.

A square stance often leads to staggered feet, with one foot lunging in front of the other. We don’t want that.

This leads to inefficient power generation as the legs push off the ground unequally. It introduces variables we don’t want. We don’t jump highest that way. Nor do we generate our best power transfer from a staggered lunge.

Forcing ten toes leads you to do the stagger. The stagger leads to posture changes in spine angle and deep knee bend to complicate the shooting sequence.

When you can load to a natural stance and posture, you’ll remove arbitrary physical limits that interrupt a smooth shooting sequence.

Players apply force down the center of the ball with their hands.

Ten toes to the rim influences the shooting hand to lay across the ball. Allowing footprint freedom will find a shooter's authentic way to lay their shooting hand down the center of the ball. You’ll see overly square shooters releasing with their pinky & ring fingers touch the ball last, making them struggle with getting the ball to rotate down the shot line. This is BAD.

The majority of shooters have the same dominant eye and hand. Not all, but most.

Turning your feet gets both eyes on the shot line. This is good. It’s worlds better than shooters lifting the ball closer to their dominant eye (which is often off their shot line), especially with ten toes to the rim.

Dominant eye impacts stance and lift position more than anything else.

Bring the eye line to the shot line. It will drastically improve posture and aim.

Principle: Just because teaching players to shoot with 10 toes to the rim is widely accepted, doesn’t mean it’s good. It’s not. Allowing shooters the freedom to shoot with tilted feet will accelerate their development.

Shooting 10 toes to the rim is myth 1 out of 10 that should not be shooting absolutes.

You won’t want to miss the next hot topic, we will debunk what may be the MOST HARMFUL myth…

I’m Tyler and this is SAVI. Wisdom Applied.

Don’t be afraid to reach out, I’m here to help.