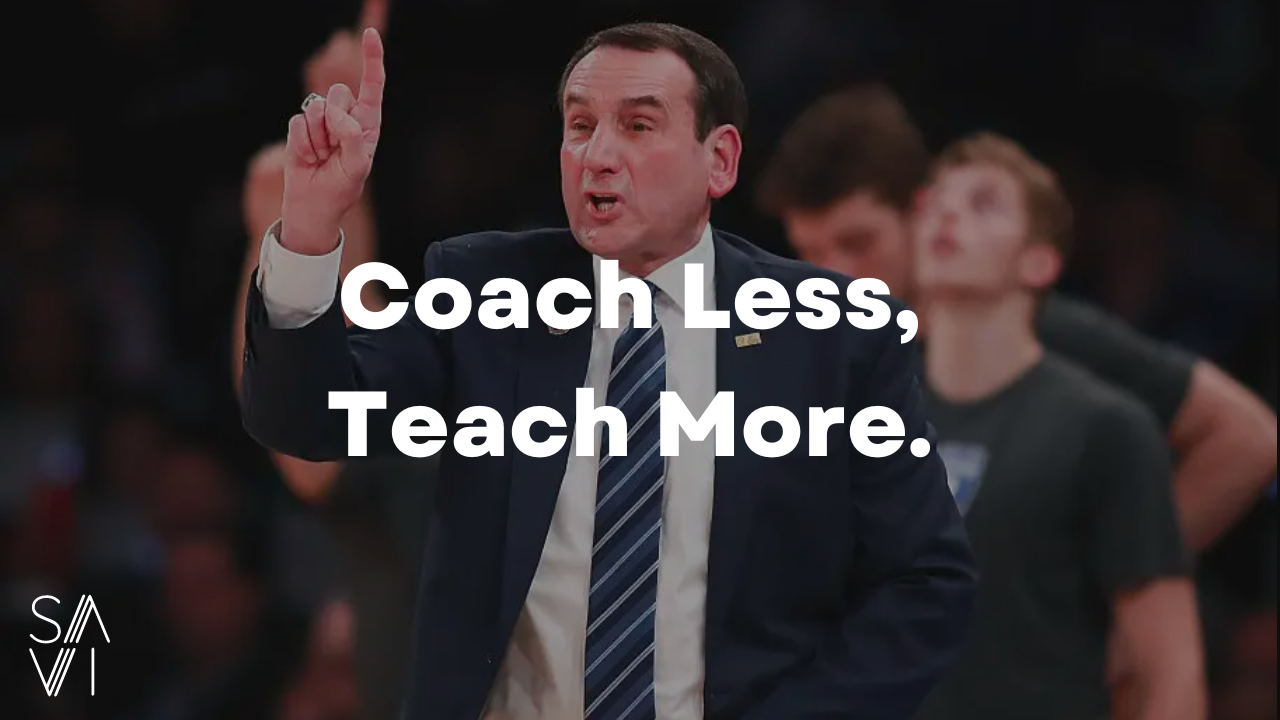 Do you coach or do you teach?

I was in the gym and saw a team start to practice. Curious, I sat down to watch. I found myself on the sidelines wanting to help badly. And although this coach knows more about his team than I do, I know more about teaching than he does. Within 15 minutes of watching, I found three ways to help.

This coach was stuck on the first level of coaching. They identified a problem (many of them) and shared their frustration (lots of it). The result was everyone feeling crappy. It’s countercultural (and rare) for coaches to ask other coaches for feedback. What’s even rarer is accepting feedback you didn’t ask for. It’s unheard of. It often just triggers a defense mechanism. If feedback is offered, most coaches simply say thanks and move on. Then, they’ll do the same things, the same way (for years) and wonder why things haven’t improved.

What type of coach are you? Are you a coach who takes valuable feedback, no matter who it came from?

Socrates said the knowledge of self is the beginning of all wisdom. Once we begin to really know ourselves, we start to see how little we actually know. We see how much growth still remains. That wisdom leads to humility. True humility isn’t thinking less of yourself, it’s thinking about yourself less. True humility is taking valuable feedback rather than assuming you know everything (as so many people do). When you realize it’s not about you, you’re ready. When the student’s ready, the teacher will appear.

What type of coach are you? Are you ready to seek out feedback and act on it?

Three pieces of feedback for you to act on immediately:

Do you have lines in your practice? Does your team struggle to have game-like speed and intensity in practice? Does it frustrate you when you see sloppy passes and missed layups? If your answers are yes to these questions, then you’re probably doing it wrong. If you have a line of 6 players, put half of them on defense and all three problems addressed above become solved.

As lines decrease improvement and engagement increase. Also, an opponent raises intensity levels. Why? The drills become harder and require more effort. If a player can get away with a sloppy pass or lack of focus they’ll choose to. Defenders eliminate both.

• Get more reps building their stance and positioning

Bones over cones, put defense on (nearly) everything you do. And yeah, it will be messy at times. But, messy wins. Bones beat cones every time.

What type of coach are you? Are you ready to get messy and engage more of your players?

If you do it, measure it. If you don’t measure it, it’s not worth doing it. Go out and watch for yourself. See how many reps a player gets in one minute of your favorite drill. Seriously, do it. You’ll be blown away. For most teams I consult, they start at about 1 rep per minute. ONE REP!!!!!!!! Coaches, that is NOT efficient. It’s not good, it’s not SAVI.

Get those reps per minute (rpm) up to about 6 per minute. How? Use both sides of the court, side baskets, bones over cones, assistant coaches, more balls, tighter space. C'mon, do the math and be better. The math says: The more reps they get, the more engaged they’ll be, and the more everyone improves. Listen to the math. Measure what you do and increase your rpms.

What type of coach are you? Do you intentionally measure your drills?

The simplest way you can improve your player development lens is to adopt action-based skill development. Simplicity wins. If you want to teach a skill, marry that skill with an action that the player will be in often. For example, take the skill of playing powerfully off two feet. What is an action that puts this particular player in that situation often? Can’t think of one? Then don’t work on that skill!

Simplicity wins, get good at what you do most often. Most players shoot open corner 3s too often. Don’t get bored, most coaches and trainers get bored and bounce around to way too many skills, that’s why there’s lots of skill development and very little player development.

What type of coach are you? Are you willing to develop more than just skill?

Bonus: The cheat code (for any endeavor): Find a mentor who is an expert in their field, knows things you don’t, and get as much specific feedback from them as possible. Platitudes and generalizations are good for direction, but bad for implementation. They lack the specificity needed for maximum impact.

I’m on a mission to coach coaches and take programs to the next level.